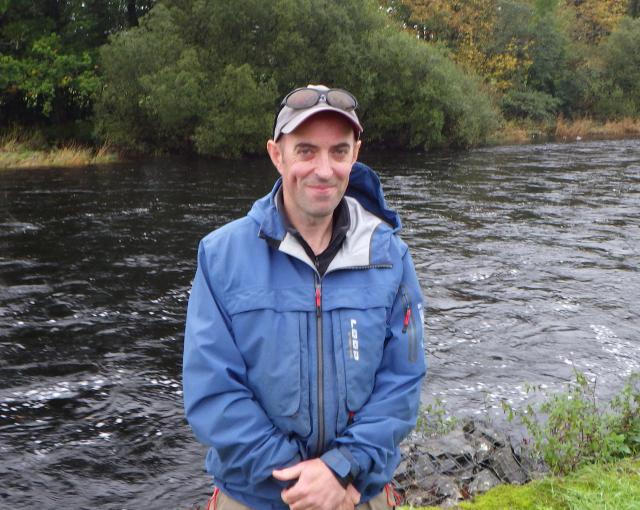 Over the last couple of months my main focus was completing electrofishing sites, as it was for most staff, but that doesn’t mean I didn’t get up to plenty of other things as well. For example, I took part in an exciting fish rescue in the plunge pool of the hydroelectric dam at Tongland Power Station, I assisted with surveys at Purdomstone (a manmade reservoir that is may be decommissioned so that a more natural burn can reform), we conducted fish and invertebrate surveys on land which is in the early stages of planning for a wind farm to be constructed, I helped remove an obstruction to a fish pass in the Polbae Burn which was blocking fish from moving upstream, and much more.

After a long season and a very rainy last month, we have wrapped up our electrofishing for this year, as it is now the time of year that salmon and trout will be building their redds and spawning. Therefore, it is best if we stay out of the rivers as best we can and cease electrofishing to avoid disturbing these redds. We are now organising potential habitat restoration projects to be carried out over the winter months while electrofishing has been halted.

As I previously mentioned, I have been involved with some fish rescues, which are an important part of what GFT does, as they are usually required when construction works are being done either in rivers or on the banksides which have the potential to harm fish, especially if there is going to be heavy machinery entering the water course. One of the more predominant fish rescues I have taken part in recently was at the plunge pool below the Tongland hydroelectric dam which needed some repair work done, meaning that it would need to be drained causing fish to be trapped. So in order for the work to be carried out, we were tasked with removing the fish so that repairs could be done with no risk to the health of the local fish population. This fish rescue was particularly exciting for me as I was given the chance to work with some different fish species besides the usual as the drained area was packed full of bream and perch which were safely removed and released upstream of the dam.

When something as potentially impactful as a windfarm is proposed to be built it is essential from an environmental standpoint that you identify what types of wild species inhabit the area as a windfarm can cause some major disturbances, especially if construction is not carried out with the proper precautions in place. That is why companies like GFT play an important role in identifying these species and suggest necessary safety measures that will need to be implemented to reduce the impact of construction on local fish populations. With the demand for renewable green energy ever increasing, more and more wind farms are being built all over Scotland meaning that these types of surveys are an important tool in helping to protect fish all across the country.

Lastly I am happy to say that I have had confirmation that I will be attending a number of training courses as part of my internship most of which are being run by the SRUC Barony in Dumfries such as an ATV driving course, a chainsaw crosscutting and maintenance course and an emergency first aid course. These courses are all relevant and useful to have done as a lot of habitat restoration work involves cutting and transporting heavy materials such as logs that can then be used to create flow diversity or instream cover making all three of these courses perfect, especially the first aid course as there are always a number of things that can lead to emergency first aid being required. I am also booked into an SFCC course in ArcGIS pro that is currently being arranged and will no doubt come in handy. None of this would have been possible for me if it were not for my internship here at the Galloway Fisheries Trust which is funded by the Galloway Glens Landscape Partnership and the Hollywood Trust, so I would like to extend a massive thank you to all of them.