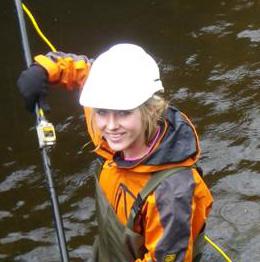 We have become accustomed to a bit of a washout in August, but Saturday’s river levels had panic set in for the go-ahead of our annual Kirkcowan Fishing Competition.  With the Bladnoch worryingly high and peaking at around five foot overnight, many places were deemed inaccessible on Saturday morning.  However, reassured by a small fall in river height early morning, the decision was taken that only a limited number of beats would be presented and as such, the competition entry fee would be waived.

The word of this fortune must have travelled fast and we were swamped by a record number of anglers queuing for entry – 39 adults and 8 juniors in total – who began fishing at 09:30 between 13 beats from the very bottom of the river at Kirwaugh to the upper reaches of the Tarff (Airiligg) and main Bladnoch (at Shennanton).

Encouraged by the high entry but with a sinking feeling that very little would have been caught during the event, we were flabbergasted on return to the Craighlaw Arms at 5pm by the news that six salmon had been landed and a further five lost, all upon the Tarff!

Five grilse of similar weights were recorded with 2nd best fish going to Kane Fortnum for a grilse of 6lb 13oz at Kenmure.  On Thomas’s Dam, Lockerbie anglers John Mulligan, Ronnie Mulligan and Alan Beck each secured a grilse, with Alan adding a cracking 13lb salmon to his return to take Best Fish and a lovely bottle of 10 year old Bladnoch Single Malt.  Colin Richardson, who had called the Tarff and in particular ‘Thomas’s Dam’ as the winning beat earlier that morning, was rewarded with a grilse of his own at Kenmure.  Best Bag was taken by Ronnie Mulligan who added an eel to his grilse return.

Brown trout featured lightly in this year’s catches, as did eels and coarse fish, of which only two pike and a single perch were recorded.  In the junior competition, Connor Wright took 1st place and the Peter Greasley Cup for two brown trout caught at Shennanton and William Salfonmoser took 2nd place and the Bill James Shield for a single perch caught at Dalreagle.  Junior angler Cameron Ryman was the lucky winner of a fly rod, kindly donated by the proprietors of the Craighlaw Arms.

Despite the challenging river conditions this year, the day was a great success and would not have been possible without the many kind donations made by local businesses who input prizes for use in the tombola (please see list of sponsors opposite).  Many thanks to proprietors of the Craighlaw Arms – David and Deborah  McBain - who hosted the event and put on a free buffet following the prize giving; to Belhavan Best; to Kirkcowan Angling Club, Colin Richardson and Jonny Haley for sponsoring the junior awards; to Sharpe’s of Aberdeen for providing a fantastic trout fly rod as winning prize in the £5 board – won by Ronnie Mulligan; and finally, to the Bladnoch District Salmon Fishery Board proprietors for donating use of their beats free of charge and in particular, to Sir Michael Wigan and Dick Scott for also donating many prizes.